It will come as no surprise to Medicine Hat and Lethbridge, AB drivers who consider 2015 Chrysler 200 reviews know that it offers more power, better safety, and enhanced technology when compared to either the 2015 Ford Fusion, the 2015 Mazda6, or the 2015 Nissan Altima. After all, our customers are familiar with the reliability and performance offered by this celebrated brand, so they’d rightly expect nothing less than the best.

You don’t need to read Chrysler 200 reviews to know that it looks, feels, and drives like a luxury sedan — the only thing that says any differently is the price tag. With a lower starting price than the 2015 Ford Fusion, 2015 Mazda6, or the 2015 Nissan Altima, you’ll be able to stand out from the crowd without breaking the bank.

You won’t find 9-speed automatic transmission in the 2015 Fusion, 2015 Altima, or the 2015 Mazda6. In fact, 9-speed automatic is completely class-exclusive — the only mid-sized sedan that makes this cutting-edge technology available is the 2015 Chrysler 200.Of course, the standard 6 gears which other models find suitable does provide acceptable performance, but this segment-first 9-speed transmission takes the Chrysler 200 into the range of the exceptional. That number of gears means further refinement of the 200’s impressive power, offering smooth shifts and noticeably enhanced acceleration. It also means better fuel economy, with a 26% improvement from last year’s 200 model. Simply put: it’s the best, and you deserve it.

Each vehicle has been equipped with a high-quality standard engine, but sometimes standard just isn’t enough. From our extensive experience, we know that many Medicine Hat and Lethbridge, AB drivers are passionate enough about driving to demand the very best performance possible.The 2015 Chrysler 200 can provide, with an optional engine choice that rises above anything the Fusion, Mazda6, or Altima can offer. The 200 can be fitted with a 3.6L Pentastar VVT V6 engine, an award-winning machine that produces a best-in-class 295 hp and 262 lb-ft of torque. The Nissan Altima comes in at a distant second, offering 270 hp, while the Mazda6 and Ford Fusion provide only 184 and 181 hp, respectively.

The 2015 Chrysler 200 was awarded a Top Safety Pick+ by the Insurance Institute for Highway Safety (IIHS). The IIHS puts new vehicles through a battery of five crash tests to ascertain the level of protection they offer to drivers, and the Chrysler 200 beat out the competition.

The 200 was confirmed as one of the safest mid-sized sedans on the road, scoring ‘good’ – the highest rating available – on every crash test. The new Fusion, Mazda6, and Altima couldn’t match that level of protection, with each rated as only ‘acceptable’ in the small overlap front trial.

Of course, each vehicle still provides a generous level of safety for you and your family, but you’ll need to drive the Chrysler 200 to get the best. 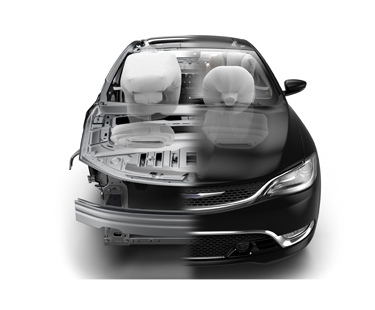 Review the 2015 Chrysler 200 for Yourself in Medicine Hat, AB

Don’t just stick to 2015 Chrysler 200 reviews — it’s available now at Jackson Dodge in Medicine Hat, AB. Come down to our showroom today and enjoy a test-drive near Lethbridge in the only mid-sized sedan worthy of your time.