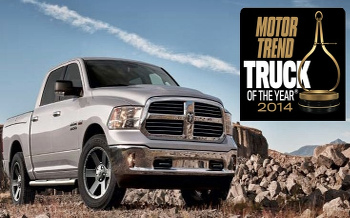 After careful deliberation, the 2014 Ram 1500 was officially named Motor Trend’s 2014 Truck of the Year®, and here at Jackson Dodge in Medicine Hat, we could not be more excited! This is the second year in a row that the Ram 1500 has received this award, and it’s the first time that Motor Trend has given it to the same truck back-to-back. It’s been 15 years since a half-ton pickup was outfitted with a diesel engine, but the new Ram 1500 broke new ground by offering customers a 3.0L diesel engine in a light-duty truck and Motor Trend certainly noticed.

One of the many reasons the Ram 1500 was named Motor Trend’s 2014 Truck of the Year® is due to this engine’s superb low-end torque output. The 3.0L EcoDiesel powertrain is capable of 240 hp and 420 lb.-ft. of torque for fast acceleration and impressive towing capability. When properly equipped, the 2014 Ram 1500, using the 3.0L EcoDiesel engine, can tow up to 4,173 kg with ease.

Best of all, this engine is mated to a standard 8-speed TorqueFlite automatic transmission, which offers optimum shifting performance, and it’s the only 8-speed transmission in its class. After Motor Trend ran efficiency tests on this engine, the 3.0L EcoDiesel received an 8.4L/100 km highway rating and a 12.4L/100 km city rating, which is truly impressive.

Here are some other features that set the 2014 Ram 1500 apart from the competition.

If you would like to find out more about why the new Ram 1500 was named Motor Trend’s 2014 Truck of the Year®, contact our sales team at (866) 615-6841 today! Our dealership is located at 1500 Strachan Road in Medicine Hat, so stop by soon for a test drive in this award-winning truck!