Which of the Jeep Models is Right for You?

Those who consider Jeep models often do so because of their rightful reputation for off-road excellence. Perhaps unlike in the past, modern Jeep vehicles have the amenities and comfortable interiors to serve as beloved daily drivers for families and individuals alike. All of us a Jackson Dodge in Medicine Hat, AB are pleased to offer the full lineup of Jeep models to Lethbridge and the surrounding communities — but do you know which Jeep model is right for you? Read on to learn a bit about each vehicle in the Jeep lineup.

The Jeep Wrangler is the quintessential off-roader: its rugged looks come to mind when most people in Lethbridge and throughout Canada think about tackling the trails in a capable SUV. This model’s heritage traces all the way back to legendary 4×4 vehicle that transported soldiers in World War II, and its incredible off-road prowess can be yours to command. A 285-hp 3.6L Pentastar engine is the beating heart of the 2014 Jeep Wrangler; it can be paired with either a five-speed automatic or six-speed manual transmission. Skid plates protect the underside of the vehicle from debris, a heavy-duty suspension helps you navigate rough terrain, and off-road tuned braking ensures that you can stop when you need to do so. If you’ll be heading way off of the beaten path, it’s tough to top the Wrangler. The only real downside to this model is that it doesn’t offer the same level of interior refinement as its peers. You’ll be comfortable in the Wrangler, but you’ll also be well aware that it’s built for the trails.

The Cherokee debuted in the 80s, and stood out from other SUVs for its innovative (at the time) unibody construction, its relatively compact size, and its rugged styling. The modern Cherokee is a highly regarded small crossover that’s ideal for families in and around Lethbridge. It’s been a hot seller at our Medicine Hat dealership, in part because of its combination of available tech features and off-road capability. In fact, the 2014 Jeep Cherokee has earned the title of 2014 Canadian Utility Vehicle of the Year.

It’s not hard to see why the 2014 Cherokee is earning accolades along with the other Jeep models at our Medicine Hat dealership. In addition to it’s tremendous off-road capability and class-leading towing capacity — up to 2,0451 kg — you’ll also have access to a wide range of technological amenities, such as the Uconnect 5.0 multimedia centre, 3D Garmin navigation, and a seven-inch customizable in-cluster display centre. While versatile, the Cherokee isn’t as spacious as its larger cousin, the Grand Cherokee. If you want more versatility, you may want to look at the larger Jeep model.

The Patriot is built on the same platform as the Compass, but features upright, boxier styling that hearkens to the Cherokee models of old. It differentiates itself from the Compass further with steeper approach and departure angles, high ground clearance, and a low-range gear. The rugged appearance of the 2014 Jeep Patriot belies its smooth road manners and family-friendly interior. Best-in-class rear legroom, best-in-class cargo capacity, and a standard 12-V power outlet speak to the practical benefits of the Patriot, while soft-touch surfaces, available heated front seats, and available leather-faced seats give the vehicle an air of refinement. Like the Compass, it’s available with four-wheel drive, but the emphasis is on serving as a reliable, comfortable daily driver. 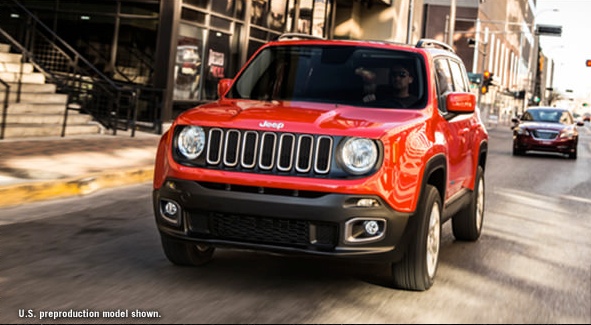 Jeep’s current small SUVs cater to those who like to stay on the roadways — but that will change when the 2015 Jeep Renegade arrives at our Medicine Hat dealership in late 2014. Its small stature and rugged styling come along with best-in-class 4×4 capability. In fact, the Renegade will give you a choice of two advanced 4×4 systems — and with seating for five, generous cargo space, and a slate of excellent features, you’ll be comfortable whether you’re on the road or off. Both of the available Jeep Active Drive 4×4 systems feature a fully-disconnecting rear axle, giving it the efficiency of a 4×2 model. The axles engage only when 4×4 traction is needed — the 2015 Renegade will be the first small SUV to boast this feature. In addition, the available Selec-Terrain traction system will ensure that you’re ready for a variety of conditions. If you want the best qualities of the Compass and the Patriot in a smaller package, but with the off-road capabilities of Jeep’s other models, the upcoming 2015 Renegade may be the right choice for you.

Take a Test Drive of All Jeep Models at Jackson Dodge

At Jackson Dodge, we’re proud to offer the full lineup of new Jeep models. If you’d like to take a test drive, or to learn more about the hotly anticipated 2015 Jeep Renegade, you can do so by visiting our dealership at 1500 Strachan Rd. S.E. in Medicine Hat, AB. We proudly serve drivers from Lethbridge and the surrounding communities, and we hope to see you soon!